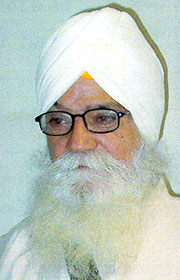 Son of a teacher who established a Khalsa school in village Chuhar Chak, District Moga, Punjab was born in a Brahman Family in the year 1935. He took Amrit in the year 1976 at Anand Pur Sahib. Prior to taking Amrit he lived and taught school in England and Canada. His last stint at teaching was in New Westminster, B.C. from 1969 to 1974. Built a few new homes and worked as a real estate salesman for a while before moving to India in 1978 for good. Walking into his father’s footsteps, he started Swami Sachidanand Smarak Vidyalya in the economically backward area of Uttar Pradesh. He firmly believes that all religions have the teachings which can enable a follower to have a close relationship with the Creator. Hindu, Muslim and Sikh boys and girls attend this school. Along with the secular education the students are introduced to the basic spiritual tenets of all religions.